While many welcome the new technology, will driverless car DUI arrests even be possible? Maybe but not likely given the reasons explained below. In addition, without major changes in laws, DUI arrests occur now even if someone is not actually “driving.”

Undeniably, with new changes in vehicle technology, “autonomous” driving is coming. In addition to safety features, we are promised full driving ability. So what does this mean for DUI arrests? Probably less than most people think. And here is why. Because people love to drink and prefer to drive themselves, driverless car DUI arrests will continue. Furthermore, there are so many entities that benefit from those DUI dollars.

While cars even now can parallel park, apply the brakes, and stay in your lane, there will always be human error. For example, we have ignition interlock systems that prevent your car from starting if you’ve been drinking. Yet people always find a way to get around it. Rather than making good choices, drunk drivers become more clever. After all, that’s the problem with impaired judgement.

Who Benefits from Driverless Cars

As a result of driverless cars, tired people, executives, the elderly, teenage drivers, and drunk drivers will benefit. Almost everyone can enjoy the freedom from having to drive. Of course, we will lose the joy of driving just for fun. Nevertheless, MADD (Mothers Against Drunk Driving) is understandably excited about automated vehicle technology. After all, poor choices by impaired thinking still kill and injure people every year. But will driverless cars resolve all driving issues? Probably not.

And Who Does Not Benefit

First of all, city and state governments will get less money. After all, if cars drive perfectly, say goodbye to traffic tickets. Consequently, how will they replace those funds? In addition, no more need for driving schools or high school driving classes. Furthermore, insurance companies rates will fall as accidents decline. Hence, as insurance rates go down, the industry becomes less profitable. In addition, taxi drivers and Uber will become relics. Finally, with predicted fewer DUI, criminal lawyers will suffer. But don’t cry for us. There will always be divorces. 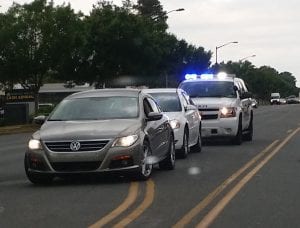 Almost everyone believes you have to be “driving” for DWI or DUI. Hence, the “D” stands for “driving” in both North Carolina and South Carolina. However, under current law, we defend persons parked on the side of the road or asleep behind the wheel. Because “driving” is defined as being “under physical control,” driverless cars are not exempt. Furthermore, even in the movies, drivers can switch to a “manual” mode. So even in the future, drivers will still be arrested for DWI in driverless cars. In the meantime, here in the present, call us if you are facing a Charlotte DWI. Then let us take over your defense from here. Try not to worry. This is what we do.