What Does Implied Consent Really Mean? 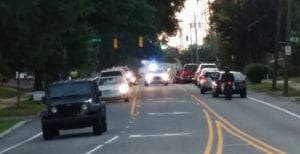 The practical effect of implied consent is that law enforcement bypasses the warrant requirement for chemical testing. Additionally, since implied consent laws bypass what would normally be a search falling under the 4th Amendment to the United States Constitution, the courts are able to punish refusal to submit to the chemical testing. There have been constitutional concerns, including the implication of the 5th Amendment right to refuse to be a witness against yourself, due process, and unreasonable search and seizure.

The 5th Amendment to the United States Constitution protects individuals from being forced to incriminate themselves in criminal proceedings. Incriminating yourself is defined as exposing yourself to an accusation or charge of a crime. On first glance, it would seem that a person charged with DWI has a valid defense here against being compelled to participate in the breathalyzer test. After all, he may be incriminating himself by voluntarily providing a breath sample for the breathalyzer. However, the act of providing a breath sample is not protected by the 5th Amendment.

The 5th Amendment only extends to so-called “testimonial” evidence. That is, if a police officer or prosecutor asks you to be a witness against yourself, then you cannot be compelled to say anything against yourself. But things like how you look, what your voice sounds like, or the chemical composition of your breath, are mere physical facts, and the 5th Amendment protection does not extend to facts like these.

Historically, implied consent laws have been struck down on failure to conform with the Due Process Clause. The due process requires that there be some method of adjudication that allows the defendant in an implied consent offense to be heard. In North Carolina, the implied consent statute meets creates a hearing process that allows the defendant to be heard by the court and the air any objections he or she may have to the charge of refusing to submit to chemical testing. North Carolina’s statute thus complies with all due process requirements.

The 4th Amendment protects citizens from “unreasonable” searches and seizures. What makes a search or seizure “reasonable,” according to our constitution, is that a warrant is issued that is supported by probable cause and describes the person or things that will be searched and/or seized. The police need a warrant to seize parts of your body, such as taking a blood sample. Thus, they cannot take even your breath without a warrant. But if you consent, if you voluntarily give a breath sample, then the breath sample is technically not “seized” because you participated in handing over the sample.

According to North Carolina law, merely by using the roads, you have implicitly consented to a breathalyzer test. So, even if you do not actually consent, it doesn’t matter, the mere fact that you drive a vehicle on the roads of North Carolina means that you have given implied consent to the breathalyzer test. Courts have generally treated these kinds of statues very favorably and constitutional challenges to these actions have not been successful.

The most important consequence for refusing a breathalyzer test is that your license will be suspended for 12 months. Normally, this suspension is automatic. However, you can request a DMV Hearing to contest this automatic suspension. You must request this hearing very quickly – within 10 days of the court’s order of revocation being mailed. If the DMV Hearing is successful, then you will receive your license, or North Carolina driving privileges back.

In addition to the automatic suspension of your license, the refusal to submit to a breathalyzer can be used as evidence against you in the DWI trial itself as evidence of impairment. This means that not only can you get punished for refusing to submit to the breathalyzer, but that very refusal can help prove the DWI conviction. Rarely is it ever “worth it” to refuse the breathalyzer test, as the consequences of refusal will just compound what will happen with a conviction. Only in rare circumstances should a defendant refuse the breathalyzer test in order to minimize legal consequences against him.

There is often confusion about whether one can refuse to take a breathalyzer test without consequences.  Some people say that a person can refuse while others say that they cannot. This is because there are two kinds of breathalyzers that are encountered during a DWI encounter. The first is a field test breathalyzer, which is known as the AlcoSensor PBT (Portable Breath Test). This breathalyzer is not as reliable as an evidentiary breathalyzer and the blood alcohol content level readout on this machine cannot be used as evidence against you.

Currently, this test is use to determine if you have a positive or negative alcohol reading. However, when the officer brings you down to the station, there is another breathalyzer, the EC IR 2, which is used to get a blood alcohol concentration level that is admissible at trial. The evidentiary breathalyzer is much more accurate and the blood alcohol content readout of this machine can be entered into evidence against a defendant. This is the breathalyzer test this article is about.  Refusal to take this test carries with it harsh and immediate consequences. Better call us to sort it all out.