You are here: Home » Burglary/Robbery/Larceny

Police are charging two men with burglary after they entered a residence and fired shots at the inhabitants, authorities stated. 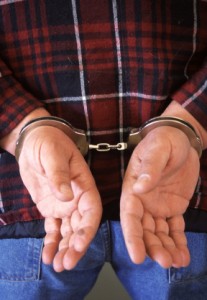 Earlier this morning 2 men broke into a home on the 1900 block of Camp Green Street.  The residents who were home at the time said that one man kicked in the door but that neither man said anything or took anything.   During the event a shot was fired from outside the home and went through the wall and struck one of the residents in the leg.

According to the North Carolina statutes, there are elevated degrees of robbery and burglary, starting at 1st degree and working its way downward to second degree. Specifically, the statute states that ” there shall be two degrees in the crime of burglary as defined at the common law. If the crime be committed in a dwelling house, or in a room used as a sleeping apartment in any building, and any person is in the actual occupation of any part of said dwelling house or sleeping apartment at the time of the commission of such crime, it shall be burglary in the first degree.” N.C. Gen. Stat. § 14-51( 2012.)

“If such crime be committed in a dwelling house or sleeping apartment not actually occupied by anyone at the time of the commission of the crime, or if it be committed in any house within the curtilage of a dwelling house or in any building not a dwelling house, but in which is a room used as a sleeping apartment and not actually occupied as such at the time of the commission of the crime, it shall be burglary in the second degree. For the purposes of defining the crime of burglary, larceny shall be deemed a felony without regard to the value of the property in question.” Id.

Essentially, the determining factor is whether or not someone was in the dwelling at the time the burglary took place at night.

The Greensboro Police Department, among others in the state, is in the process of implementing a DNA database for the region.  The goal of this program is to store DNA samples collected from people either with their consent, or through a court-order.  The database will include DNA samples of people throughout the region with the hope that it will help to disclose patterns pertaining to certain crimes.

This lab will be set up to assist the Burlington Lab Company, a privately owned company,  who will also assist in the program’s implementation.   Regions, that have implemented such a program, have found a significant drop in the crime rate, specifically burglary, and vehicle thefts.  Therefore, the new program will allow Greensboro, to rely on a local crime lab rather than the state lab in Raleigh.  Further, they can concentrate some energy on property crimes; something that is not a priority for the state crime lab.

Regions throughout all of North Carolina are beginning to implement such programs to increase the efficiency of systems that uncover criminal acts.  Therefore, there will likely be a rise in the amount of people charged with property crimes in these regions.